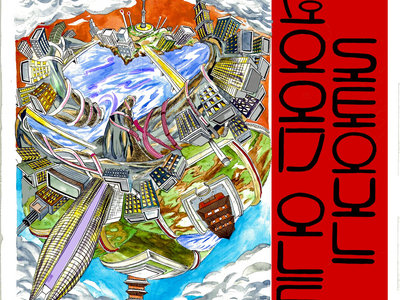 Artist Statement:
Having never personally been to Seoul, I wasn't certain what I wanted to say about it. I knew I didn't want to include people, representationally or otherwise. I know that Seoul is an ultra-modern city, highly international and cosmopolitan, but also built on the shoulders of a culture originating nearly four thousand years ago. I knew also that this piece would be accompanying a piece of music, and I wanted to include the verve, swing and organic life of that form in the composition.

Korean artwork is traditionally very bold, something I tried to incorporate in the song's title, with the aggressive black on red. The swirling arms of city, open field, industrialization and feudalism appealed to me. I didn't want to place a value judgment on the present day as opposed to Korea's history, so the circular composition was a natural fit. The image can be "read" from top to bottom, side to side, any way one might be holding it, and still hopefully convey the scale of Korean history, writ small in one deliberately self-reflexive piece.​

Biography:
Stephen Pellnat has his roots in the mountains of upstate New York. He took a sharp left turn at 18, upon enrolling at Manhattan's School of Visual Arts. The next decade was spent in New York City, before relocating with his wife, Molly Dechenne, to Portland, Oregon.

Stephen Pellnat's artistic influences run the gamut, from Norman Rockwell to Medieval gold-leaf religious altarpieces. He's self-published his own comics for years, as well as providing illustrations for a number of publications. In recent years he's found an enjoyable outlet in album artwork and musical promotional artwork, for those groups and artists who feel his style would suit their own. Currently, Stephen is hard at work on a comic biography about Richard Nixon.

Includes unlimited streaming of Good Ole Seoul via the free Bandcamp app, plus high-quality download in MP3, FLAC and more.