Themes From a Mission Hill Rooftop 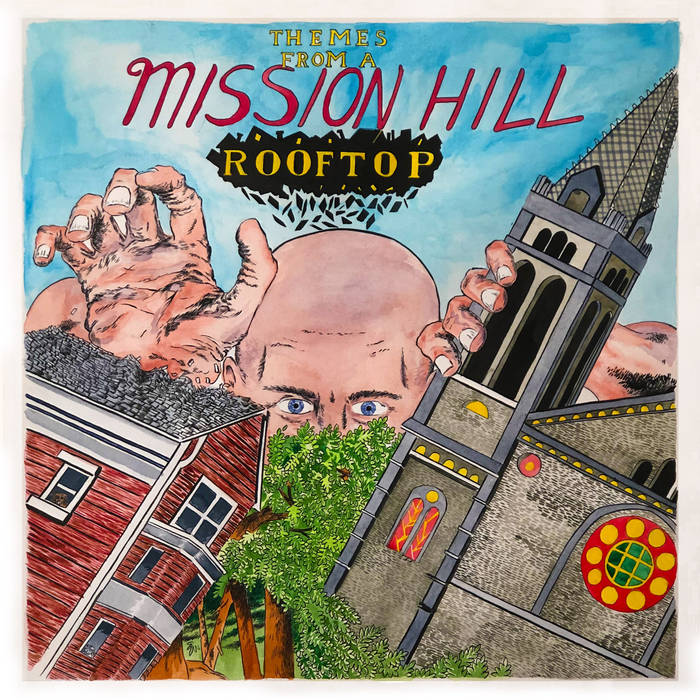 Every month in 2018 Cocek! Brass Band released a new song with different artist and music collaborations. For the 12th and final single of the year they worked with Portland, OR-based artist Stephen Pellnat on this watercolor painting. They also added David Andrew Moore on snare drum and Daniel Fratina on accompanying 3rd trumpet.

About the music:
​
Themes From a Mission Hill Rooftop is a unique composition for the ensemble.  It's the first through-composed piece of music in the band's five year recording history.  Starting off with a slow, brass band-style dirge, the tuba enters alone followed by trombone, flugelhorn and finally trumpet. Throughout the next 6 minutes the ensemble jumps from theme to theme, representing the Mission Hill neighborhood where trumpet player and bandleader/composer Sam Dechenne calls home here in Boston.

Put on a good pair of headphones and dive in. We hope you enjoy the final piece to this year's project!
​
About the Painter:

Stephen Pellnat has his roots in the mountains of upstate New York. He took a sharp left turn at 18, upon enrolling at Manhattan's School of Visual Arts. The next decade was spent in New York City, before relocating with his wife, Molly Dechenne, to Portland, Oregon.

Stephen Pellnat's artistic influences run the gamut, from Norman Rockwell to Medieval gold-leaf religious altarpieces. He's self-published his own comics for years, as well as providing illustrations for a number of publications. In recent years he's found an enjoyable outlet in album artwork and musical promotional artwork, for those groups and artists who feel his style would suit their own. Currently, Stephen is hard at work on a comic biography about Richard Nixon.

David Andrew Moore is a drummer based out of the north shore of Boston.  Having graduated from Berklee College of Music and working with a myriad of ensembles across the Northeast, his musical influences both as a performer and a teacher have a wide scope.  He plays snare drum on the recording.

Daniel Fratina is a composer, arranger, transcriptionist, trumpet player, and clinician.  He has been writing and arranging music for big bands and orchestras full time for over ten years, with recent work for the Boston Pops, the Kennedy Center and independant bands and ensembles from over 20 countries all over the world.  He adds his sectional playing to this song with dapper civility.
​
Website:
www.dannyfratina.com